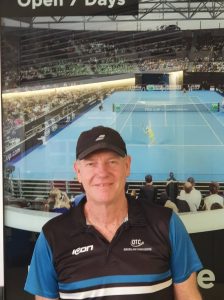 How long have you been coaching and what coaching qualification do you hold?

I first started coaching in Sydney during my 20s but not under any formal program. Upon retiring from corporate life, I completed the Tennis Australia Community Coaching Course in 2019 and the Junior Development Course in 2021. For the past two years I’ve been working as a Hot Shots program coach at the Queensland Tennis Centre

What programs do you coach/ most enjoy coaching?

I’m currently focused on coaching juniors in the Orange Ball level of the Hot Shots program. The Hot Shots program is a wonderful way for kids to learn tennis in an environment that is tailor-made for their level of experience and maturity with modified equipment and court sizes as well as lots of tennis specific game play.

What is your coaching philosophy?

Developing a love of the game is the key priority. I want to hear my students say: ‘I love coming to tennis’, to help get my students to the point where they will say ‘yes, I’m a tennis player’ rather than just ‘yes, I learn tennis’.

What do you enjoy about coaching?

When you feel you’ve made a connection with the player, they listen to your guidance and it results in a positive and repeatable change on the court.

How old were you when you started playing tennis and where?

I started playing around the age of 8 in the Illawarra tennis district of Sydney idolising players such as John Newcombe, Tony Roche and Rod Laver. In my teens I was often a ball boy for them, and other players of their era, at major tournaments such as the NSW Open and NSW Hardcourt Championships. In my teens I was an A Grade competition player and Interdistrict and representative school player. I also played in a string of regional tournaments and once managed to secure a win over the No.1 ranked under 17 player in the state in reaching the semis of the Illawarra Tennis Championships.

Who is your favorite tennis player?

Pat Rafter, Ash Barty and Karolina Pliskova (I drove her back to her hotel during the 2019 Brisbane international…the night she won the title. I had a long conversation with a genuinely nice person).

What is your favorite thing to do outside of tennis?

My two primary passions in life are sport and music. I’ve been playing a variety of sports for most of my life and have only recently given up soccer and cricket due to some ongoing injuries. I also play guitar and sing in a couple of bands. The one I’m most proud of also involves two of my daughters, both of whom have fabulous singing voices and share my love for 60’s, 70’s and 80’s music. You might see us occasionally at the Brookfield Markets.